The GameStop short squeeze saga popularized the Reddit term "diamond hands", used to describe an investor who holds an investment regardless of the risks. Given the current macroeconomic environment, long-duration U.S. Treasury holders are among those with diamond hands. Bond yields rose sharply in the first quarter as the vaccine rollout, another round of Covid stimulus, and the possibility of another $2.3 trillion in infrastructure spending raised nominal growth expectations. 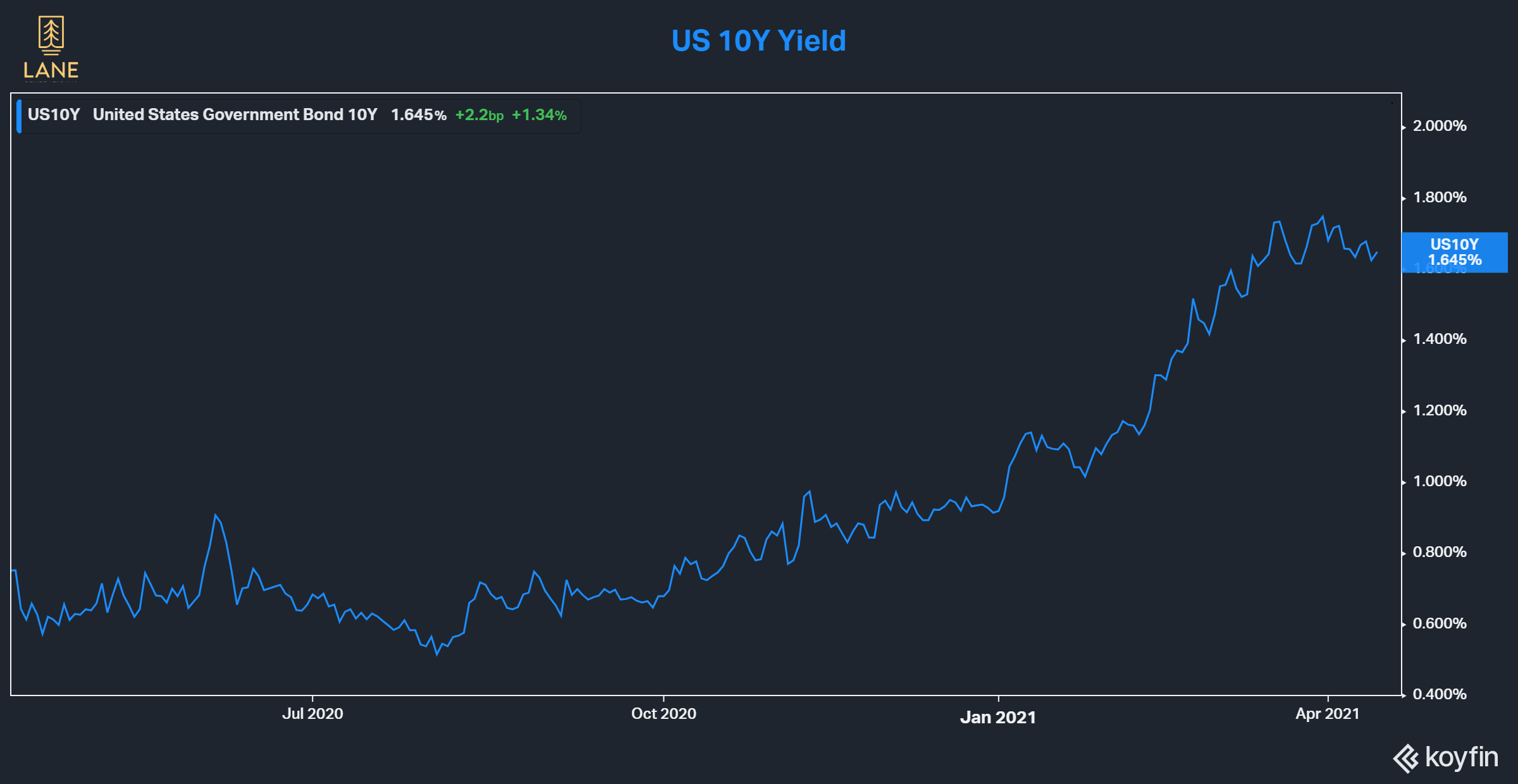 Despite what felt like a sharp rise in rates, they are still, by any historical measurement, extremely low. 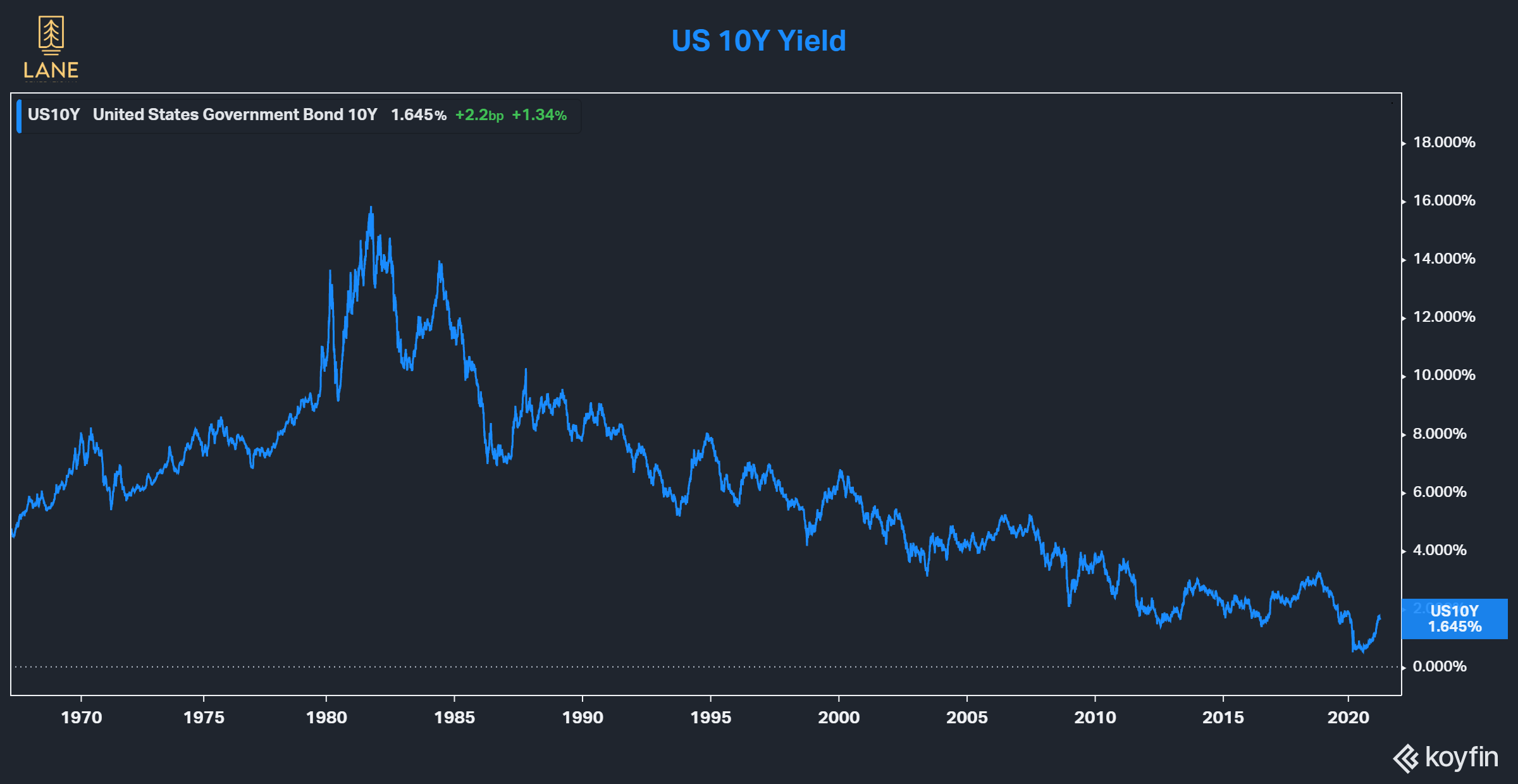 For Illustrative Purposes Only
The question on Mr. Market's mind is whether rates will stay this low and for how long. The inflation debate is at the crux of the future path of rates, and for the time being, the market seems to be buying the Federal Reserve's narrative that any inflation will be transient. The 5Y/5Y Forward rate, which is the market-derived 5-year average inflation expectation 5 years from now, is just over 2%,  consistent with the Fed's long-run expectations[i]. Outspoken market participants are rather divided as to whether we are entering a new inflationary regime or a continuation of deflationary forces that have been present for the last several decades. As described in our last post, one of the key structural changes in this post-Covid world is the dramatic use of fiscal stimulus to support the economy. This infusion mechanism circulates cash directly to real goods and services. Secondly, the pandemic has highlighted several supply chain weaknesses, some driven by Covid-19 disruptions, others by years of underinvestment, and even geopolitical factors. The semiconductor chip shortage, for example, has been especially difficult for U.S. manufacturers, who have had to diversify out of mainland China to other suppliers in South East Asian countries, such as Taiwan, in response to rising geopolitical tensions, further worsening the supply bottleneck[ii]. Before the pandemic, major technological advances in production techniques and logistics, as well as cheap overseas labor, had been significant deflationary forces keeping a lid on prices. While innovation will continue to drive manufacturing efficiencies, the industrial strategies of the U.S., EU, and China are likely to put pressure on exporters and promote domestic production, which would mean higher costs for the consumer[ii].

While there are reasons to think this time may be different, technology-driven productivity gains may continue to surprise to the upside and quell price increases. Independent of inflation's trajectory, it is clear that real rates (adjusted for inflation) will remain negative for the foreseeable future. The U.S. fiscal position simply cannot afford positive real rates. The U.S. is currently running a public debt-to-GDP ratio of 129%[iii]. This does not include unfunded liabilities, such as Social Security, Medicare, and pension payments, which are estimated to total over $100 trillion, dwarfing the $27 trillion of publicly held debt used to calculate the debt to GDP ratio[iv]. Since 1800, 50 of 51 nations have defaulted after passing the 130% debt-to-GDP threshold, Japan is the only exception[v]. The most common form is in real terms, ie. printing their way out through inflation, rather than a nominal defualt[v]. A default in real terms means persistent, and often deep, negative real rates. This environment typically benefits gold, as the opportunity cost of holding the metal disappears, while its store of value properties shine. Equities also stand to benefit, a recipient of increased allocation from bondholders, whose investments lose purchasing power in such circumstances. Fixed-income investors may need their "diamond hands".

Leveraged to the Hilt  ⚔

Major banks made headlines this quarter for their involvement in the Archegos Capital fiasco, as Tiger cub Bill Hwang lost more than $20 billion in just a few days. Archegos accumulated large positions in just a handful of stocks, using up to 5x leverage via equity-linked swaps whereby several banks were extending him credit without understanding the full scope of his 100 billion dollar market exposure. Hwang was banned from managing outside money after being accused of insider trading and pleading guilty to wire fraud in 2012, which meant his new firm Archegos was confined to family office status and therefore not required to file a 13F. Using swaps, coupled with the lack of a 13F disclosure, he was able to conceal his identity and position sizing.[vi]

The saga serves as a warning sign to investors regarding the side-effects of speculative fervor which has reigned supreme over the last twelve months. Credit Suisse announced $4.7 billion in losses, just shy of two times their 2020 net income[vi]. Leverage often builds in times when returns come easy, but upon reversal, the unwinding can be devastating. As Warren Buffett says, "it's only when the tide goes out that you learn who has been swimming naked". In this era of cheap money, fueled by zero-interest-rate policy, margin debt has accelerated to mark the fastest year-over-year growth on record. 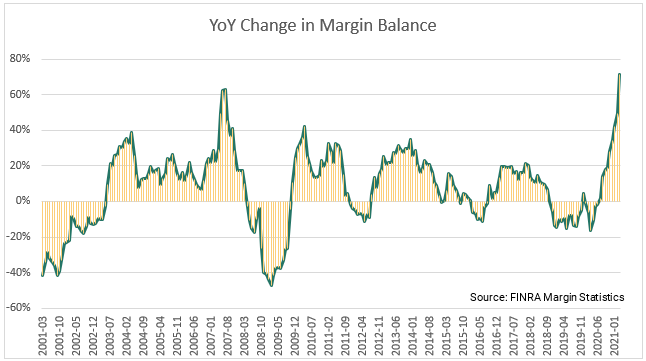 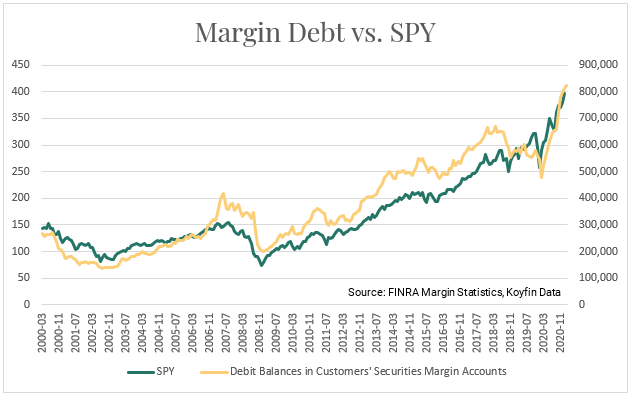 As we look ahead to the second quarter, there are a few possible contributors to negative flows to keep an eye on. Each circumstance alone is unlikely to bring any noticeable selling pressure but together may prove significant. Tax day, postponed until mid-May, might be a wake-up call for many novice retail traders, who are likely to be unaware of the gains they generated or haven't portioned aside enough cash to pay their bill. Secondly, we have now cleared the 12-month holding period for buyers of last year's sharp March sell-off, meaning investors will be more inclined to realize those gains under long-term treatment, only exacerbated by the administration's intention to raise the capital gains rate. Lastly, the U.S. is on the cusp of returning to some sense of normal social and economic activity thanks to an impressive vaccine rollout. The O.E.C.D. now expects the U.S. economy will grow 6.5% this year, nearly double the 3.2% forecast in December[vii]. This resumption of activity and release of pent up demand in certain sectors likely means retail investors, who have been a driving factor of market direction, will prioritize spending excess funds in areas such as travel and entertainment, in lieu of investing in equities. In 2020 the stock market reflected the pull-forward of demand for technology and the expectation of a strong recovery, in the face of real-time economic gravity. The realization of these expectations in 2021 should boost the health of Main Street but may have a muted reception on Wall Street.

The flurry of SPACs continued in the first quarter of 2021, as 257 have filed for IPO year-to-date, which exceeds the gross number of SPACs in all of 2020, a record year in its own right[viii]. There are now over 300 SPACs searching for acquisition targets to bring public. 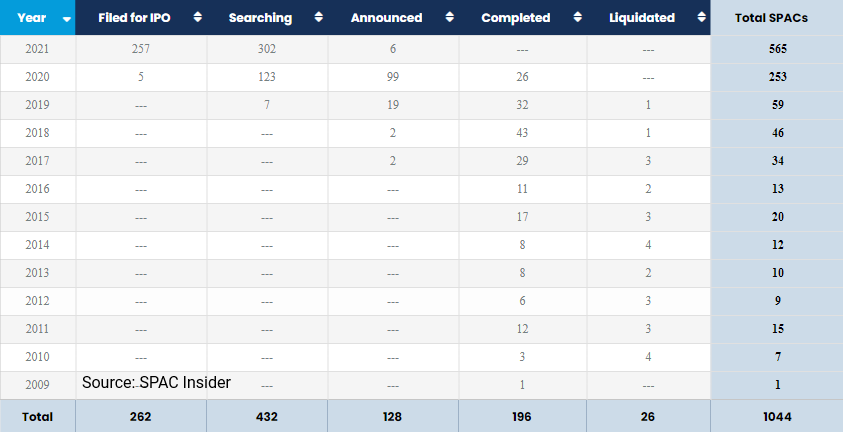 While there are many aspects of SPACs to be wary of (excessive promoter carry, unfavorable deal prices, less regulatory oversight), we have reasons to be optimistic. Since 1998, the number of publicly listed companies in the U.S. has been more than cut in half[ix]. Much of this can be attributed to expansive growth in the venture capital and private equity industries, as companies can raise equity without the associated costs, reporting burdens, and scrutiny of being public. Assuming most SPACs still searching are successful in finding an acquisition target, the SPAC boom will bring over 500 companies public in just a few year span. Excluding SPACs, there were also 232 traditional IPOs in 2020 and another 118 to date in 2021[x].

While many offering and deal prices have been reflective of euphoric sentiment, we are encouraged by the increase in public companies associated with innovation themes on which we focus. As the spotlight begins to fade, we believe there will be exciting opportunities going forward where the SPAC process has meant a lack of coverage and sponsorship by sell-side research and subsequently underfollowed by the buy-side. This cohort should offer active managers an increased investable universe from which to generate alpha.

A notable milestone in the development of 5G occurred this quarter, as the U.S. Federal Communications Commission completed its auction of the mid-band spectrum (3.7-4.2 GHz). Carriers, such as AT&T, Verizon, and T-Mobile, paid a cumulative $80 billion for the licensing rights to the spectrum[xi]. Mid-band frequencies offer a compelling compromise between speed and coverage for 5G applications. 5G, as defined by the International Telecommunication Union (ITU), utilizes a combination of low, mid, and high frequencies to deliver the following[xii]:

These network capabilities will usher in an entire set of applications and services not previously possible. URLLC, for example, will be able to support mission-critical workloads where near zero latency is essential, such as industrial automation, telesurgery, virtual reality, and connected cars. mMTC will enable massive networks of connected nodes for applications including smart cities, logistics and transportations, smart metering, and smart agriculture. Fixed wireless access will deliver WiFi speeds to suburban and rural areas, where fiber is too costly to lay or maintain, to support both residential and commercial use cases. 5G doesn't just mean faster streaming speeds on your mobile phone, it's a new age of ubiquitous coverage empowering not just the Internet of Things, but the Internet of Everything.

The information provided is for educational and informational purposes only and does not constitute investment advice and it should not be relied on as such. It should not be considered a solicitation to buy or an offer to sell a security. It does not take into account any investor's particular investment objectives, strategies, tax status, or investment horizon. You should consult your attorney or tax advisor.

The views expressed in this commentary are subject to change based on market and other conditions. These documents may contain certain statements that may be deemed forward‐looking statements. Please note that any such statements are not guarantees of any future performance and actual results or developments may differ materially from those projected. Any projections, market outlooks, or estimates are based upon certain assumptions and should not be construed as indicative of actual events that will occur.

All information has been obtained from sources believed to be reliable, but its accuracy is not guaranteed. There is no representation or warranty as to the current accuracy, reliability, or completeness of, nor liability for, decisions based on such information and it should not be relied on as such.

Derivative investments may involve risks such as potential illiquidity of the markets and the additional risk of loss of principal.

No investment strategy or risk management technique can guarantee returns or eliminate risk in any market environment. All investments include a risk of loss that clients should be prepared to bear. The principal risks of Lane Generational strategies are disclosed in the publicly available Form ADV Part 2A.

For additional information and disclosures, please see our disclosure page.